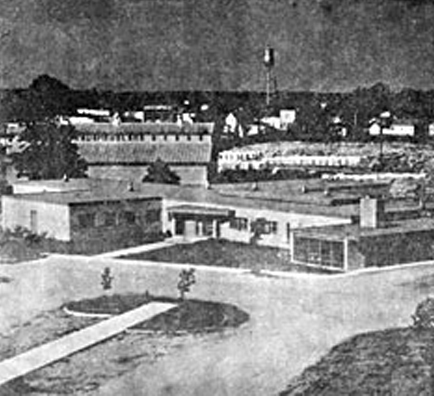 In the early 1950s, the lack of available healthcare in the Mille Lacs region had become an acute concern for the people living here. The idea of building a hospital in Onamia quickly gained support. The Crosier Fathers and Brothers, a religious order of the Catholic Church, were instrumental in deepening this conviction and encouraging action. When the state of Minnesota declined to give money to the project, passionate residents went to door-to-door in every neighboring community, collecting donations big and small from farming families, business owners, retirees and others. Fundraising was held in every community, as well as on the Mille Lacs Indian Reservation. The residents of the Mille Lacs area saw their dream come true when work on a new twenty-eight-bed hospital began in 1954.

Management and administration of the hospital was entrusted to the Franciscan Sisters of Little Falls, Minnesota. The hospital was completed in 1956 and was staffed by Franciscans and Mille Lacs area employees. The first patients were admitted on April 1, 1956.

In order to serve the region’s aging population, construction of a forty-bed nursing home was started in the fall of 1961. The first residents were admitted in the fall of 1962. A major addition in 1979 doubled the size of the existing home and provided a spacious activities room with a panoramic view of Lake Onamia. The first residents moved into the new addition in April of 1980.

In 2001, another renovation was undertaken and a beautiful Memory Care Unit was added for residents with memory care needs. Expansion and renovation of the remaining areas of what is now called Long Term Care began in the spring of 2003.

The first Mille Lacs Area Health Clinic opened in 1977 with the help of a grant from the Robert Woods Johnson foundation. The clinic, then known as Mille Lacs Family Health Center, was a community-owned, not-for-profit corporation, officially directed by a board composed of community members from the Mille Lacs area. Initially the clinic was staffed with National Health Service Corps doctors who offered excellent care but often left at the end of their two-year commitment.

In 1990 Onamia and Isle Clinic merged with the hospital, along with the hospital and nursing home, and Mille Lacs Health System was created. In 1994, as a result of community efforts and financial support, neighborhood clinics were built in Isle, Onamia, and Hillman. A fourth clinic was added in Garrison in 2006.

In December 2022 we expanded our services to Milaca in the southern part of the county. Our newest clinic is on the historic site of the Milaca Community Hospital and offers a wide range of services including those of the Mille Lacs Health System Chiropractic and Physical Therapy of Milaca.

Mille Lacs Health System remains a not-for-profit, community-owned organization. A nine-member Board of Directors comprised of members from the Mille Lacs community directs and oversees the entire organization.

In 2022 Mille Lacs Health System opened two community pharmacies to better meet the needs of the communities we serve. We do more than fill medications; we are committed to helping residents and visitors maintain their optimal health. As part of the healthcare system, our pharmacists can now access patients’ health histories and review prescription updates without a separate provider check-in. Our pharmacy teams take the time to get to know our patients and provide the personalized care they deserve. It’s an exciting and needed expansion of our services.

Despite rapid technological change and the economic stresses of today’s healthcare environment, Mille Lacs Health System remains strong. Numerous medical and surgical specialists have joined our healthcare team, providing diagnostic and support services that allow for a sophisticated level of diagnoses and treatment in a local setting.

Our mission and values compel us to strive to be the best place to give and receive care. That means we genuinely care about not only the medical care we give, but also the employees who provide that care. We believe in order to assist our patients with maintaining optimal health; patients need to be seen as an important part of our team. In addition to traditional services, we now provide counseling services as well as health education, wellness, and rehabilitation programs.

Thanks to the hard work of many dedicated employees, directors, and trustees — and strong support from area communities — healthcare in the Mille Lacs region has become better and better since those first patients were admitted to the Onamia hospital in 1956. We are proud to play a significant role in improving the quality of life of the people and communities we serve. We are proud of being part of a community-driven, community-supported healthcare system. We look to the future with confidence.