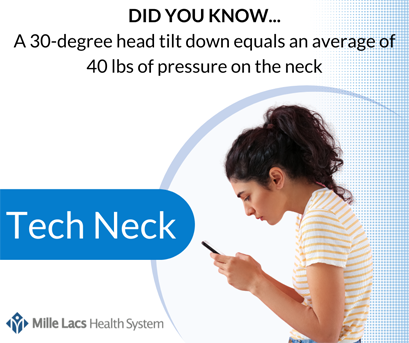 Currently, 85% of Americans own a smartphone. Ten years ago, only 35% of the U.S. population owned a smartphone. The trend of handheld devices is a relatively newer one. As a society, we are enjoying many of the benefits handheld technology gives us, but are also just starting to realize how our new addiction can also affect our bodies.

Smartphone users spend an average of two to four hours a day with their heads dropped down texting, reading emails, scrolling social media, and watching videos. This results in 700 to 1,400 hours a year of excess stress on the cervical spine. Teenagers are most at risk, as they could spend an additional 5,000 hours per year in this position. These estimates include all tech devices such as: smartphones, tablets, laptops, video game consoles, and more.

The average device user often sits or stands with some degree of tilt downward in their neck when using their device. The average human head weighs 12 lbs, so when you sit or stand with a straight back, shoulders rolled back, and looking straight ahead this is considered a 0-degree head tilt with 12 lbs of pressure on your neck. See the chart below for examples of other degrees of head tilt and pressure on the neck.

30-degree head tilt down equals an average of 40 lbs of pressure on the neck.

60-degree head tilt down equals an average of 60 lbs of pressure on the neck.

Tech neck is an unofficial name for the pains associated with prolonged poor posture, especially in the neck when using handheld technology devices. Other posture elements to consider when using handheld devices also include a slouched spine, rounded shoulders, and prolonged bending in the arms/wrists.

A few ideas to remember to ease pressures on your body when spending those many hours on your device: