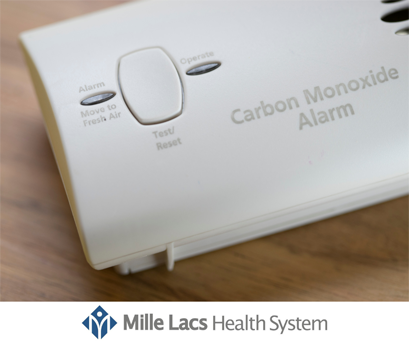 Carbon monoxide poisoning can sneak up on you as it is an odorless, tasteless, and invisible gas. When people are exposed to carbon monoxide (CO) gas, the CO molecules will displace the oxygen in their bodies and lead to poisoning.

Typical carbon monoxide poisoning symptoms include: headache, nausea, dizziness, vomiting, confusion, and tiredness. The CDC estimates that every year approximately 400 people in the U.S. die from unintentional CO exposure. Additionally, more than 100,000 people visit the emergency room, and more than 14,000 are hospitalized.

Carbon monoxide is produced whenever a material burns. Typical burning materials found in or around the home include: natural gas, propane, gasoline, or wood. Common sources of CO in homes include fuel-burning appliances and devices such as: clothes dryers, water heaters, furnaces or boilers, fireplaces (both gas and wood), gas stoves, and ovens. Items typically found outside or in attached garages such as generators, grills, or vehicles left running can lead to dangerous CO levels as well.

Signs that appliances are not venting properly can be: streaks of soot around appliances, orange or yellow flame in pilot lights or gas burners (the flame should be blue), no upward draft in the chimney, excess moisture on walls or windows, and rusting flue pipes.

A safety tip for this time of year is to be sure the vents around your home on both the ground and your roof are clear of snow and ice.

Other areas of exposure outside the home can be out during recreational activities such as camping or ice fishing. Items such as camp stoves, grills, fuel-burning lanterns, and generators should never be used inside a tent, RV, or ice house.

The State of Minnesota requires CO alarms in all single and multi-family residences within 10 feet of each room used for sleeping. CO alarms can be hard-wired or battery-operated. The typical lifespan of a CO alarm is between five and seven years, but it varies by manufacturer.

According to the Minnesota Department of Health, the level of CO indoors should be the same as CO concentrations outside. In the Minneapolis/St. Paul metro area, outdoor CO levels typically range from 0.03-2.5 parts per million (ppm) averaged over an eight hour period. These levels are well below the federal standard of 9 ppm for CO in outdoor air. In general, concentrations are lower in rural areas and higher in urban areas. Finding CO concentrations higher indoors than outdoors indicates a source of CO either inside or very close to your home.